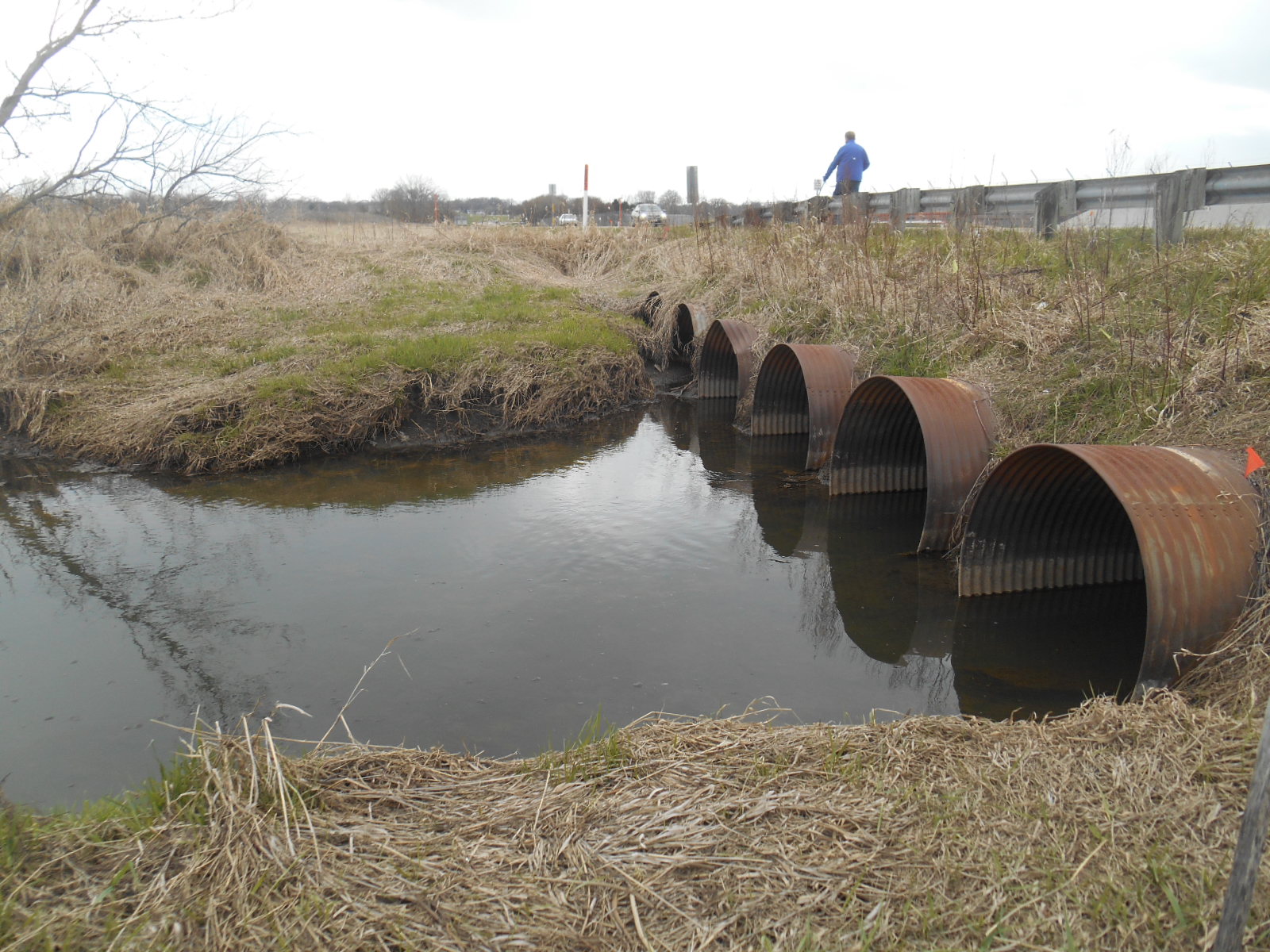 “Something has to be done immediately” about Starkweather Creek, Melody Homesley, a 16-year resident of the Darbo Worthington neighborhood, told Isaac Wasserman when he interviewed her for his Wisconsin Watch article. (Below, Melody and her friend Carnetta Galvin at the bridge over Starkweather Creek in the Darbo Worthington neighborhood. Photo by Isaac Wasserman, Wisconsin Watch)

What is being done about Starkweather creek? More pollution!

In preparation for the F-35 fighter jets, numerous new facilities are currently being built at Truax Field on top of highly PFAS contaminated soils and groundwater–which will ooze, drain, spew or otherwise discharge into the creek, directly or indirectly. With DNR’s approval, contaminated soils disrupted during construction will be buried under “impervious surfaces.” Contaminated groundwater sucked up to build foundations will likely go back into the creek.

Are all DNR laws being followed? No. Is anyone measuring how much PFAS is going into the creek? No. Is anyone assessing its impacts on the creek, sediments, fish and wildlife downstream? Exposures among people who live along it and eat the fish? No. Is anyone engaging the most affected communities? No.

What about PFAS remediation? The military recently proposed to contract a small local firm, Orin Technologies, to do a “pilot study”– an experimental bioremediaton approach in which bacteria, “bioabsorbent media” (BAM) and other “proprietary” materials are injected into the groundwater. According to Orin’s proposal, “BAM is a sustainable, pyrolyzed, recycled cellulosic bio-mass product (>80% fixed carbon) derived from a proprietary blend of recycled organic materials.” These substances will be injected around just one of the many contaminated areas on the base that the military says “will be affected by construction activities related to F-35 modifications of the base.”

Below, photos of the experimental technology featured in Orin’s proposal

Orin Technologies previously installed a different kind of BAM technology at a stormwater outfall at the base (under a contract with Dane County airport). It failed to reduce PFAS levels in the stormwater. As for this new proposal, even DNR (while saying it is “very interested in the research”) has some significant questions about it. The proposal includes very sparse text explaining the technology, along with a few photos (including the above).

Government officials and the military have known for years about the significant PFAS contamination at the base–and the extent to which it has already spread down Starkweather Creek and all of the Yahara Lakes. At this point, proposing only some dubious experimental “research”–injecting bacteria and proprietary gunk into the groundwater to see if it works at one hotspot–is beyond troubling.  It reflects an obvious lack of urgency–and complete disregard for the people and wildlife who have already been exposed to the PFAS spreading from the airport and base for decades.

While the military tinkers around with these “pilot studies,” much bigger questions loom, unanswered to date: Why are we allowing these F-35 construction projects to go forward at all over this extremely contaminated land and groundwater, especially when per NR700 laws, the vertical and horizontal extents of the contamination in soils and groundwater have never been delineated? If the PFAS contamination is buried under more and more buildings and concrete–how can it ever be fully delineated and cleaned up?

It can’t. Perhaps that’s the plan. And it’s well underway…

As I predicted over six months ago, the DNR is issuing–at breakneck speed– separate “approvals” for “Materials Management Plans” (MMPs) pertaining to F-35 building projects. Numerous data reports and DNR approvals for each of the projects have been issued in the last several months, in different formats and from different consultants.

The levels at the “F-35 Repair Apron” are the highest PFAS levels found at the airport and base to date–even higher than those originally found at the base in 2018 and at the burn pits in 2020. (MEJO’s map of Truax Field and Starkweather PFAS levels will have to be updated…)

How is DNR requiring PFAS-contaminated media to be “managed?”

As for the PFAS-contaminated soils, in the most recent (Oct. 26) approval, Ales said burying them under “an impervious surface” would suffice. Here’s an excerpt:

“In accordance with the materials management plan approved for this site on July 21, 2021, PFAS containing soil will be placed under an impervious surface at the completion of this project…” (highlights added)

To be fair, there are no really good solutions on what to do with soils and other media contaminated with highly hazardous PFAS “forever chemicals,” though it is an active area of research. Earlier MMPs and DNR approvals said contaminated soils would be taken to landfills. Perhaps the landfills refused to accept the wastes after those plans were submitted? Landfills are increasingly unwilling to receive PFAS wastes, and as of yet there are no good technologies to destroy PFAS compounds completely without creating further pollution problems elsewhere.

Still, recognizing that where to put these “forever chemical” wastes is a formidable problem, is burying PFAS-soaked soils under impervious surfaces at the Truax base–on an airport with a complex, dense labyrinth of storm sewers beneath it, all leading to Starkweather creek–the best solution? This buried PFAS will continue to leach into the creek–indefinitely–even if it is buried “under impervious surfaces.”

This is the epitome of “sweeping the problem under the rug,” as the saying goes–leaving it for future generations.

What about the extraordinarily contaminated groundwater? The October 26 letter says:

“Groundwater samples collected from the borings detected eighteen different PFAS compounds with many of those
compounds showing quite elevated concentrations. The PFOS levels in groundwater (27,800 ng/l to 42,200 ng/l) were
particularly high…The groundwater at this location was measured to be at a depth of 5 ½ feet when the borings were constructed. If it is necessary to lower the water table at this location to complete construction activities the WANG must contact the DNR prior to starting construction to determine a proper method for containing and treating the water.”

The Air National Guard claimed before the F-35 construction projects began that they would not require “dewatering” (“lowering of the water table”). This claim is very hard to believe. The base is on a former wetland and the groundwater is very shallow–only five and a half feet down when they did the borings for the above site.

If they do need to dewater, and must develop a “proper method for containing and treating the water” for DNR, the “proper method” and “treatment” will very likely involve sending PFAS-contaminated groundwater to Starkweather Creek one way or another. [1]

Most of DNR’s NR700 laws are not being followed for the F-35 construction projects.  It appears that DNR made special arrangements with the military for these projects that fall outside of the usual regulations, and is rushing to help the military move forward as quickly as possible to finish the projects.

The full extents of the soil and groundwater contamination aren’t being delineated, per NR 716.  PFAS continues to spew into the creek. Contaminant migration pathways aren’t being investigated, nor are effects of these contaminants on “receptors” (humans, wildlife), per NR 716. The community isn’t being engaged, per NR714.

Instead, PFAS hotspots will be buried under buildings and pavement, making it impossible for a full investigation of the site to ever be done under DNR and/or CERCLA (Comprehensive Environmental Response, Compensation, and Liability Act–or Superfund).

My March post goes into detail about what happened in the last several years, how long the Air National Guard has blown off relevant DNR laws, and how they might apply to the Truax base PFAS contamination now given that it is being regulated under CERCLA.

The post includes extensive timelines and details, so I won’t repeat them here. Here’s just one relevant entry from it about how DNR laws fit into this even though the base is regulated under CERCLA:

On February 15, 2021, DNR sent a letter to the ANG recognizing that the cleanup process will follow CERCLA but state laws are still relevant–and DNR still has authority under NR700 rules.

So why aren’t our state environmental laws being followed?

[1] According to existing DNR laws, the DNR has authority to regulate the discharge of hazardous substances, which the law defines as anything the agency has determined “can cause harm to human health and safety, or the environment, because of where it is spilled, the amount spilled, its toxicity or its concentration.” This includes PFAS.  A lawsuit by Wisconsin Manufacturers and Commerce, however, may weaken or eliminate this authority, depending on its outcome.

The PFAS levels DNR allows to be released back into the creek after dewatering will depend on several factors, including what PFAS standards are eventually promulgated by the DNR, which will be influenced by the Wisconsin Legislature, military, municipal, and industrial lobbyists–and negotiations between DNR and military and airport officials. They will also depend on what standards EPA eventually develops for groundwater, drinking water, surface water and other media once PFOA and PFOS are deemed “hazardous substances” under CERCLA. The federal standards eventually promulgated will, as with state standards, be heavily influenced by Department of Defense, industry, and municipal lobbying at the federal level.