(CNN)A video posted on social media over the weekend shows the stealth fighter that crashed on a US Navy aircraft carrier last month bursting into flames as it strikes the flight deck of the massive warship.

The F-35C, the newest fighter in the Navy fleet, is seen on a video monitor from inside the USS Carl Vinson, which was on operations in the South China Sea when the accident occurred on January 24.
The footage shows two angles of the incident from separate cameras, and both show the jet on approach to the aircraft carrier. In one close-up view the plane hits the deck, bursts into flames and then spins in front of the camera full frame. The second angle captures the fiery wreck as it careens along the deck then slides off into the water.
As the $100 million fighter makes its approach to the vessel, crew can be heard yelling “Wave off, wave off,” the term used for a plane to abort a landing attempt, accelerate and fly around to try again. But the warning to the pilot comes too late to avoid the crash.
“That’s really, really scary,” said Peter Layton, a former Royal Australian Air Force officer now at the Griffith Asia Institute.
Layton noted that the F-35 seemed to have control problems on its approach to the carrier.
“As the aircraft is coming down the flaps are working overtime backwards and forwards. It looks like the pilot has lost control and is suffering oscillations,” he said.
He said the crash suggested to him the jet was not using an automatic landing system, digital controls which help limit the number of times the pilot must make corrections to get the plane safely on the deck.
“It’s a really clever piece of software that links up the flight controls [the flaps] and the throttles and also gives the pilot some display so the pilot can monitor the system and fine tweak,” Layton said. “This is a reasonably new system that came out of the F-35 program.”
The deployment on the Vinson was the first operational one for the F-35C, which only entered service in 2019. The US Air Force version of the stealth fighter, the F-35A and the Marine Corps version, the F-35B, were put into service earlier.
The US Navy confirmed the authenticity of the video to CNN, but it has not yet released a cause of the crash.
“We are aware that there has been an unauthorized release of video footage from flight deck cameras onboard USS Carl Vinson (CVN 70) of the F-35C Lightning II crash that occurred Jan. 24, in the South China Sea. There is an ongoing investigation into both the crash and the unauthorized release of the shipboard video footage,” Cmdr. Zach Harrell, spokesperson for Commander, Naval Air Forces, said in an email.
The back-to-back images seen on the screen suggest it is a recording of the incident that was being replayed on the carrier when the recording was made.
“The US Navy does videotape from several angles every landing so that they can go back and critique every pilot’s landing,” Layton said. 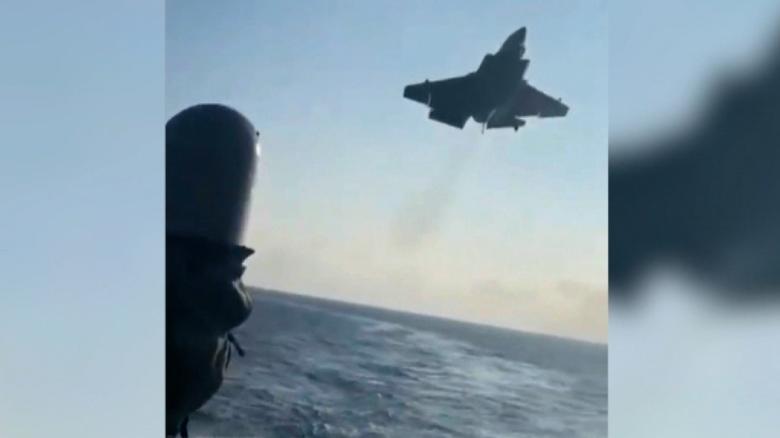 An image from the first unauthorized video leaked from the USS Carl Vinson shows the F-35C shortly before it crashed on the deck.
This video is the second unauthorized leak of the collision. Less than a week after the crash, video emerged of the plane on approach as did a still image of it floating momentarily on the surface of the sea.
Seven people were injured in the accident including the pilot, who ejected from the plane, and six others aboard the carrier.
The end of the video shows the crew responding to the incident within seconds, spraying down the deck of the carrier with foam to prevent further damage.
Shortly after the crash, Navy officials described the damage to the Carl Vinson as superficial and said it quickly resumed normal operations.
They also said efforts had begun to raise the wreckage of the stealth jet from the bottom of the sea.
Analysts said raising the aircraft would likely be a complex operation, and one that would be monitored by China, which claims almost all of the South China Sea as its territory.
The F-35C contains some of the Navy’s most advanced technology, and the analysts said Washington would want to keep it out of Beijing’s hands.
However, the Chinese Foreign Ministry said it was aware that a US Navy stealth fighter had crashed in the South China Sea, but “had no interests in their plane.”
“We advise [the US] to contribute more to regional peace and stability, rather than flexing force at every turn in [the South China Sea],” China’s Foreign Ministry spokesperson Zhao Lijian said.
Though the Navy has not revealed where in the South China Sea the crash occurred, Beijing claims almost all of the 1.3 million square mile (3.3 million square kilometer) waterway and has bolstered its claims by building up and militarizing reefs and islands there.
Chinese naval and coast guard vessels maintain a constant presence in South China Sea waters.